A Soldier and a Leader of South American Independence 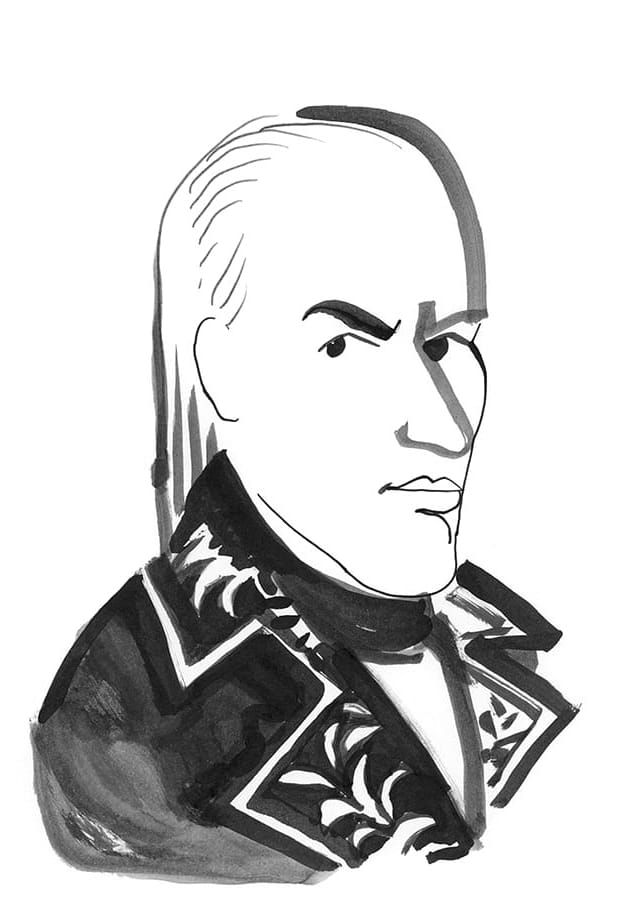 He was a military officer, an adventurer, and a conspirator. He dreamt of an independent South America and took part in Spain’s military campaigns in the Gulf of Mexico and the Caribbean during the North American Revolution. He was also a central figure in the French Revolution. He lived in exile most of his life, traveled widely around the known world, and loved life and women passionately. He spent his closing years as an outcast, ill and in prison.

Francisco de Miranda Rodríguez was born of Spanish parents in the city of Caracas, in the Viceroyalty of New Granada (currently Venezuela and Colombia) on March 29, 1750. His father, Sebastian, was a wealthy and prominent businessman. Francisco lived in the city of his birth for the first twenty years of his life, but he became disheartened by the lack of opportunity for a Creole to rise socially and professionally in society, and he moved to Madrid in March, 1771. Under the guardianship of one of his father’s friends, he studied mathematics and geography, as well as French and English. In 1772, Carlos III authorized his enlistment in the army, after he had attained the rank of captain in the Princesa Infantry Regiment. He enjoyed the company of women of different social standings, whom he would charm with his elegance and intelligence, as well as courteous and attentive manners. He had numerous lovers throughout his life, one of them an Englishwoman, Sarah Andrews, with whom he had two sons, Leandro and Francisco.

He underwent his first combat experience during the defense of the Spanish city-port of Melilla, on the northern African coast, which had been under a yearlong siege by the Sultan of Morocco. Not long after that, he took part, as many Spanish soldiers did, in the disastrous expedition to Algiers in 1775. He requested a transfer to America and was denied, but managed to be sent to Cádiz, where he met the British merchant John Turnbull, who had businesses in Gibraltar and became a lifelong friend. He also initiated a friendship with General Juan Manuel de Cagigal, who took him under his wing for the next several years. In April, 1780, when Cagigal was appointed head of the Ejército Expedicionario departing from Cádiz to combat the English in America, he named Miranda his aide-de-camp. Miranda arrived in Havana in August as a captain in the Aragón Regiment, along with 11,000 Spanish soldiers. The following year, he took part in the victorious assault on Pensacola, where the Spanish forces, under the command of Bernardo de Gálvez, conquered West Florida, dealing a severe blow to the British strategy in the United States War of Independence. In recognition of Miranda’s exceptional action in battle, the king promoted him to lieutenant colonel.

Between August and December, 1781, Miranda was in British Jamaica as Cagigal’s representative to negotiate a prisoner exchange. In fact, he was also gathering secret intelligence on the defenses of the island. When he returned to Cuba, he provided Gálvez with highly detailed sketches that would assist him in planning his attack on the British colony. The operation, involving combined French and Spanish troops gathered in the island of Hispaniola, was postponed after the defeat of the French fleet in the Battle of the Saintes and eventually canceled with the end of the Revolutionary War. The following April, Miranda was at Cagigal’s side once again, this time during the joint Spanish and North American attack on the Bahamas. It would be his responsibility to negotiate the surrender of the British garrison in Providence Island on May 8, 1782.

Over the years, Miranda built an elite personal library, which included all of the major works of the Enlightenment, books by Montesquieu, Voltaire, and Rousseau, which were considered revolutionary and, therefore, were banned in Spain and France. On the other hand, his unorthodox and countercultural traits earned him a not-insignificant number of enemies, in and out of the army. The law was often at his heels, and despite the protection Cagigal offered him on more than one occasion, he was eventually accused of sedition and of smuggling. Although later absolved of these charges, he decided to abandon Cuba, and in June, 1783, he sought refuge in the newly independent United States.

For about a year, Miranda traveled across the Thirteen Colonies and met some of the Founding Fathers, among them George Washington and Alexander Hamilton; he also met General Knox and General Lafayette. During this time, inspired by the American Revolution, he began to envision a unified South America, independent of Spain. It was an ideal to which he would devote the rest of his life. On several instances, he sought British and North American aid for an invasion that would liberate Colombia and Venezuela, but the promises he was given never came to fruition. In December, 1784, Miranda traveled to England, which seemed interested in loosening Spain’s hold over its possessions in America, in retaliation for Spanish involvement in the British defeat in the U.S. War of Independence.

Between 1785 and 1789, he traveled over much of Europe, from Italy to St. Petersburg, observing, learning, filling the pages of his remarkable journal with numerous details about current reforms and upheavals that would lead to the Enlightenment. In 1792, when it was obvious that England would not come to his aid, he moved to Paris, a city now in the throes of the French Revolution. There, thanks to the letters of recommendation he carried with him and his military background, he was given the rank of marshal in the revolutionary army. He fought in campaigns against the Prussians in northern France and Belgium. The maelstrom of the revolution and its internal intrigues would ultimately land him in prison charged with treason, but he regained his freedom in January, 1795.

Miranda returned to England, where he spent several years elaborating his political project for a new and independent South America. Despite his efforts and countless consultations, he would not garner any substantial support, either in Great Britain or in the United States, even though he traveled to Washington for a private meeting with then president Thomas Jefferson. In 1805, he convinced the Jewish banker, Samuel Ogden, and his friend Turnbull, as well as other New York businessmen, to finance a small military expedition. And so, at the head of three ships, he set sail for Venezuela, by way of Haiti. The entire effort would end in a catastrophic failure as soon as he attempted to land, and he was forced to return to England.

In December, 1810, a second opportunity seemed to open up for Miranda to carry out his plans. The Napoleonic invasion of the Iberian Peninsula had left a power vacuum in the Spanish territories of America, creating the ideal conditions for an independence movement. Miranda returned to Venezuela, this time alongside the rebel leader, Simón Bolívar. Yet, the next years would be characterized by futile fighting, dissension, and internal disputes among the revolutionary leaders, and Miranda was eventually betrayed by his companion Bolívar, who handed him over to the royalists in 1812.

Miranda was transferred to Cádiz, a city where he had spent much of his youth and from which he had departed in 1780, many years before, with his sights on America. He would be incarcerated there the rest of his life, never leaving his prison. He died on July 14, 1816, after several months of a hard and bitter illness. He is considered the great originator of South American independence, although in his dreams he had envisioned a unified South American nation, under one flag, the flag he had designed in 1805. Its colors have since been incorporated into the flags of various Hispanic American countries in his honor.