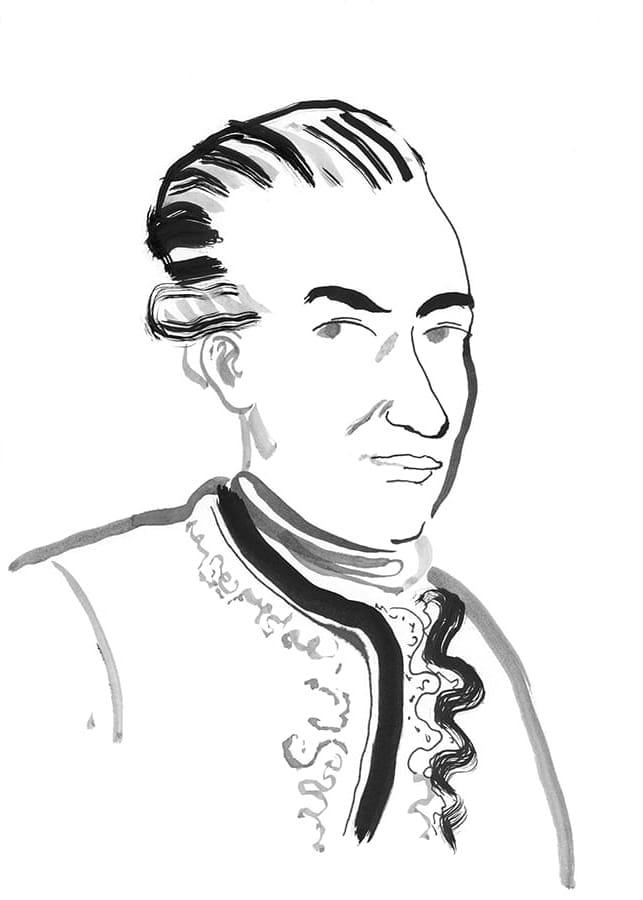 Juan Miralles, ship owner and entrepreneur, with businesses in Havana and extensive commercial ties in the Caribbean, lived in Philadelphia from 1777 to 1780. He was a representative of the Spanish Crown to the Constitutional Congress and a spy. While at this post, he maintained frequent contacts with George Washington, military and congressional leaders, the French ambassador, and other high-level officials. Using a network of agents and associates, he collected information about the enemy—the British—and arranged to have loans and weapons delivered to the Continental Army.

Juan de Miralles Trayllón was born in Preter (Alicante) as the second son in a local family of French descent. After a brief stay in France, he arrived in Havana in 1740, where he made a name for himself as an entrepreneur, mostly due to his keen business acumen, urbane manners, and interpersonal skills. Four years later, he married Maria Eligio de la Puente, of one of the wealthiest families in Cuba, with considerable personal ties to Spanish Florida.

Miralles’s commercial interests were wide-ranging and diverse. As a shipbuilder and  merchant, he had numerous business dealings in Florida and in a number of Caribbean ports, as well as Charleston, Philadelphia, New York, and Boston. There are indications that he also engaged, occasionally, in the African slave trade, serving as broker for some of his Alicante-based associates of Irish descent—a common practice among businessmen in the Caribbean and in North American coastal cities of the time. But during the 1760s, his commercial activities would focus on the import and export of goods, particularly wheat. By 1776, he had become one of the richest businessmen in the island and the owner of ten shipping vessels, schooners like the San Antonio, the Miralleson, Maria Bárbara, Marte, and El Galgo. One of Miralles’s more celebrated associates was Robert Morris, a wealthy Philadelphia entrepreneur, who would later be known as the “financier of the Revolution”.

Soon after the outbreak of hostilities, the Spanish Minister of the Indies, José de Gálvez, arranged to have secret agents in place who would inform the Spanish Crown about any British maneuvers in Florida and Jamaica, as well as events in the rebel colonies. No one could have been better suited for this task than Miralles, and on November 11, 1777, he was named Spanish representative to the Continental Congress in Philadelphia. However, the English controlled Philadelphia, so Miralles headed to Charleston, where he disembarked in January, 1778. From there, he kept in regular contact with several key figures: Edward Rutledge, member of the South Carolina General Assembly and later governor of the state; Patrick Henry, governor of Virginia; and Abner Nash, governor of North Carolina. All three governors pleaded with him for money and supplies in support of the rebels, which he provided, mostly out of his own pocket. While in Charleston, he purchased a new schooner and christened it San Andres. He used the vessel not only for his business interests in Havana, but also to send his reports to Spain’s captain general in Cuba, Diego José Navarro, coordinator of all military intelligence.

When General Clinton’s forces retreated from Philadelphia in June, 1778, Miralles settled in the city and lived in a house on 3rd Street, next to the Powell House, both of which exist today. He would soon be joined by the French ambassador, Conrad Alexander Gérard, who arrived with a small French fleet and docked off the New England coast, shortly after France and England had declared war.

During his stay in Philadelphia, Miralles would host lavish parties for various dignitaries, most notably George and Martha Washington, the Marquis de Lafayette, Generals Greene, Von Steuben, and Schuyle, numerous congressmen, and the artist Charles Wilson Peale, from whom he commissioned five copies of his famous portrait of Washington. Throughout the war, he insisted that his role as representative of the Spanish Crown be kept secret. Although Miralles was an active supporter of the rebel cause, Spain remained neutral through most of the engagement, fearful that the revolutionary fever would spread to its own territories in the Americas. So, he carried out his mission in the city with judgment and prudence, establishing a network of friends and contacts among members of Congress. Although a fervent supporter of the revolution, he reflected, in his demeanor, the official position of Spain, which would move from one of furtive support of the colonies between 1776 and 1778 to that of open warfare in 1779.

Miralles wrote regularly to the Spanish authorities in Havana, detailing the progress of the conflict and the movement of British forces. The network he had established for the purpose of gathering intelligence included business associates, captains of Spanish and American vessels navigating adjacent waters, and merchants doing business in the cities along the coast. Hence, the enemy’s actions were being watched all along a zone that extended from Jamaica through Caribbean ports to the North American shoreline.

Miralles and Washington corresponded frequently about these issues, even as Miralles continued arranging for monetary and material assistance to the Thirteen Colonies. Records show two loans of 26,600 and 14,000 Spanish pesos to South Carolina and one of 140,650 pesos to the Board of Treasury of the Continental Congress, acknowledged by General Lincoln. Miralles also advised the Congress regarding clandestine aid that the governor of Spanish Louisiana, Bernardo de Gálvez, would be able to provide, usually through a Spanish agent in New Orleans named Oliver Pollock. A detailed account of items collected by James Willing in March, 1778, includes: “large amounts of blue, red, and white cloth; six boxes of quinine; eight boxes of other medicines; 100 quintals of gunpowder in a hundred barrels; and 300 bayonet rifles.” In June, 1778, clothing and other supplies were delivered to the troops of Rogers Clark north of the Mississippi River (currently, in the state of Illinois). Enough resources to fully arm a schooner also were sent from Havana.

After Spain entered the war in 1779, its monetary and material support continued, at times in conjunction with French aid. There was also a constant interchange of intelligence about enemy troop movements. Sometime early in 1780, Miralles asked Congress to carry out attacks against the British rear guard, in order to facilitate Spanish offensives in Louisiana and Florida. Congress debated the practicality of such an assault on Saint Augustine (Florida), and Washington met with Miralles several times (in addition to corresponding with him) to settle the matter. Eventually, Congress proposed a combined French-Spanish-North American operation in South Carolina or in Georgia, and General Lincoln was ordered to coordinate these incursions with Miralles, as a tactic to assist General Gálvez in his imminent attack on Pensacola. Unfortunately, before the coordination could be accomplished, Miralles came down with pneumonia. He died on April 28, 1780, during a visit with the French ambassador to Washington’s general headquarters in Morristown. In an expression of appreciation, the American general organized a solemn funeral, during which the troops of the Continental Army rendered full state honors to the envoy of the Spanish Crown.

In a letter to the Spanish authorities, Washington wrote, “Mr. Miralles has been universally esteemed in this country and his loss will be deeply felt.” In his last will and testament, Juan de Miralles bequeathed “a new coat” to each of his servants. He likewise directed that Rafael, his only black slave, be granted freedom in Havana, and that he and his wife and son be given a piece of land “where they might settle”. Most of the loans he had provided to the American Revolution were never reimbursed to him or his estate. His secretary, Francisco Rendón, took over his mission in Philadelphia until he was replaced by Diego de Gardoqui in 1785.

Privacy Preference Center
Design and development by Diego de Sousa
MAP
By clicking “Accept”, you agree to the storing of cookies on your device to enhance site navigation, analyze site usage, and assist in our marketing efforts. View our Cookies Policy for more information.
PreferencesDenyAccept